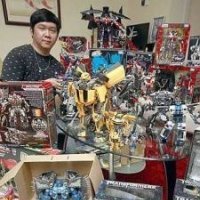 THE third installment of Transformers franchise, Dark of the Moon, has hit the big screen and one man is certainly more excited than anybody else.

Trading company branch manager Eric Chuah, 33, is all geared up to watch the movie, which started on Wednesday, as he is an avid collector of the characters and he owns more than 50 of the robot figures.

Among his favourites are Bumble-bee, Optimus Prime, Megatron and Starscream. 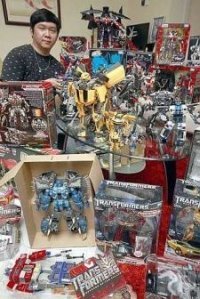 I am a Transformed manager from 2007!

However, the robots didn’t really interest him at first, not until 2007 when he was influenced by his friends.

“My friends told me collecting the characters is unique as they’re are able to transform from one form to another, unlike other toys which are only used for display purposes.

“For example, I can turn Optimus Prime into either a truck or a robot itself,” he said when met at his condominium in Jalan Harbour Place, Butterworth.

Chuah is definitely increasing his collection as he has spent a fortune on his hobby over the past five years.

Besides Singapore and Kuala Lumpur, he also made purchases through online market places like eBay and Mudah.my.

Three cabinets in his house are already filled up and he is already looking for a fourth one. Before this, the avid toy collector was only interested in Masked Rider, Spawn and Kamen Rider action figures.

“It was my friends who told me about Transformers, before I became hooked on it after watching the first installment in 2007.”

One of Chuah’s latest collection is the Megatron figure which he purchased from a shop in Island Plaza, Tanjung Tokong.

“I believe this is the only one in the country as I asked the shop proprietor to repaint the figure. It now looks great with its metal finishing, like those on the big screen.”

Despite indulging in such a healthy hobby, he still faces some resistance from his wife Lois Ngeow, 33, who would always pull a long face whenever he buys a Transformer.

Chuah said he would purchase the figures secretly and think of ways to pacify his wife later.

On the latest installment of the movie, he planned to watch it over the weekend.

“I watched the first one four times and six times for the second installment. I hope to watch the third one even more than the first two.”

Trip Back Into The Transformers Past