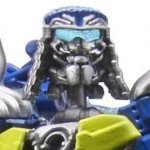 Topspin’s robot mode features “sunglasses”, a bushy “beard” and a “mullet”, making him resemble a stereotypical NASCAR fan. According to a profile during FOX’s coverage of the 2011 Daytona 500, the real-world Topspin prop car has 510 horsepower and a 11:1 compression ratio, making it a good bit more powerful than even the real NASCAR #48 it is based on!

As part of the promotions for Dark of the Moon, the film prop versions of Topspin, Roadbuster, and Leadfoot made appearances at the 2011 Daytona 500 at Daytona International Speedway on February 20th. They appeared both off the track as display cars, and on the track, participating in the ceremonial first lap. He’s not the first Topspin to be a Wrecker.