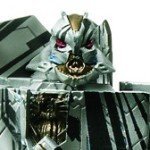 DOTM Starscream comes with a brand-new sculpt, transforming into a surprisingly accurate F-22 Raptor. In spite of being at a much smaller scale than previous Voyager class Starscreams, his parts hide much better into his vehicle mode.

His incredibly flexible arms have joints at the shoulder, in the middle of the upper arm, elbow, and wrist, allowing them to neatly fold up for transformation, as well as scratch his own back.

His null rays combine to form a double bladed weapon that’s way taller than he is. He is also one of the few Deluxe figures to have a MechTech weapon that can remain locked in both modes.