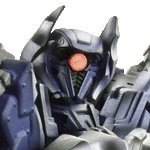 Shockwave returns in Transformers Dark of The Moon as a monstrous Cybertronian tank with his signature colour of all times – purple.

He is equipped with a MechTech Battle Cannon fitted on his right arm with a rubber hose/tube that connects to his backpack. His left arm is fitted with a detachable blade.

His MechTech mechanism works when the lever was pushed on his rear part of his arm cannon, the cannon will open up wider revealing more barrels and blades.

C joint rungs are located on Shockwave’s arm-blade, one concealed underneath said blade, and two on his AstroMag cannon, two more on his backpack, and two more on his feet. Other MechTech weapons can peg into Shockwave’s hands, on the barrel of his cannon, and behind each shoulder blade. Due to the nature of his MechTech weapon supposed to be integrated with his arm, it is not a prime candidate for swapping with other toys, due to the shape and color of the weapon.