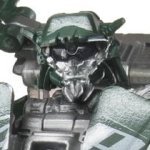 Roadbuster took the shape of a NASCAR Sprint Cup Chevy Impala specifically for Dale Earnhardt, Jr.’s bearing #88 car with National Guard and Amp energy drink logos. His MechTech weapon featuring a spring-loaded blaster weapon that features flip-out “chainsaw” blades that does not lock in deployed mode. The figure contains three MechTech ports that is located on the doors (both). He has features of a C-joint-compatible 3mm rods that supports his non-firing back-mounted missile pods. in alternate mode, the missile launchers located at the back can be deployed to emulate a stealth assault form.