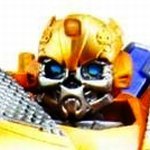 Nitro Bumblebee is an all-new mold, featuring booster engines, armour plating and other Stealth Force-like design elements sculpted onto the vehicle mode. He features five MechTech ports in this mode: one on the hood, two of the roof and two behind his rear wheels.

Nitro Bumblebee transforms rather differently to most of the other Deluxe class Bumblebee molds, with much of the entire front of the car being articulated chest pieces rather than the usual front fenders separating from the rest of the chest.

Also of note are his legs, which are considerably different in appearance and transformation to the standard set by the 2007 Transformers Deluxe class (Camaro Concept) Bumblebee, with the rear wheels ending up inside of his ankle. Both of his arms have one MechTech port each, and the ports from vehicle mode can still be used