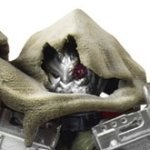 Megatron was wounded during the battle with Optimus Prime in Revenge of The Fallen and this time in Dark Of The Moon, he returns as a disfigured Mad Max tanker truck.

Half of the tanker transforms into Megatron’s MechTech Blaster, which in turn converts into a Fusion Cannon when the ladder is pushed in.

Just like an average MechTech Voyager toy, his MechTech weapon had the ability to lock into this mode by pushing the ladder all the way in and rotating it to the right.

He contains six MechTech 5mm ports in alternate mode. Three of those are on his MechTech weapon, two on the steps below the truck cab doors, and a self-covering port (which automatically fills in the hole when a weapon is not inserted) on the roof.

Megatron does have an articulation joint between where the trailer and cab connect where fifth wheel hitch would be, despite being formed from his independently-jointed legs even though the truck cab and its “trailer” are a single entity that cannot be separated.

The truck comes with rubbery tarp over the tanker that becomes a cape in Megatron’s robot mode. The cape secures the damaged face of Megatron from the past series.

Two more MechTech ports become available on his legs in robot mode with two on the truck steps end up on his arms. Whilst in this mode, all other MechTech ports from vehicle mode are still usable. Care should be taken when transforming the shoulders, as the tiny Mack dog hood ornament is prone to being snapped off by the shifting black bumper section.