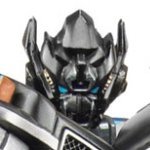 This version of Ironhide is a downsized version with a new mold. The cool aspect is this Ironhide is more accurate than the previous voyager class Ironhide toys.

He is equipped with a large MechTech Booster that converts into a “Particle Cannon” by extending and spinning its barrels when the back is pressed. Twisting the knob at the back of the weapon when it is fully extended will lock it into place. The Booster/Particle Cannon (or any other MechTech weapon) can be attached to Ironhide via 5mm post MechTech ports on either side and on top of Ironhide’s vehicle mode, as well as being held in his fists or mounted under his forearms via MechTech ports in robot mode.

Additionally, the Booster/Particle Cannon itself features a Mechtech port on its housing. The cannons and weapons included with the previous Voyager class Ironhide toys can also be used with this figure.

The Japanese release comes packed with a character card and an accompanying transparent plastic card of his MechTech weapon for the MechTech Wars online game.