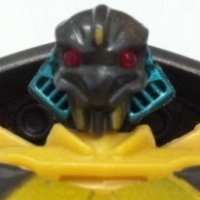 Darksteel which will be released as part of the fifth wave will be heavy retool of MechTech deluxe Sideswipe. Similar as Sideswipe, Dark Steel transforms into a Corvette Stingray concept with dark brown, blue accents and a teal flame deco.

His MechTech weapon is matched from Starscream’s with a slight retool. The weapon was made to resemble snake fangs and a scorpion stinger much to his Beast Wars Quickstrike homage. The was deliberately done this way as it’s designer Lenny Panzica likes snakes.

He was originally announced in BotCon 2011 as Dark Iron but due to some changes in production, his name was changed to Dark Steel. In Japan, Dark Steel is a Bic Camera exclusive.