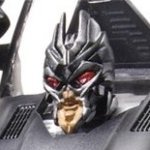 Barricade is an entirely new mold. He boasts greater screen accuracy than previous figures thanks to small design tricks. Noteworthy ones include like a rotatable chest grill for a “warped” robot mode chest, and placing his hands at the front of the car, allowing his arms to have the doors placed accurate to the on-screen counterpart. He includes a MechTech weapon, a gatling gun-barrelled Blaster that can transform into a “Robot Wrecking Claw” when a lever on the side is pulled. Like all Deluxe class MechTech weapons, it cannot be locked into place.