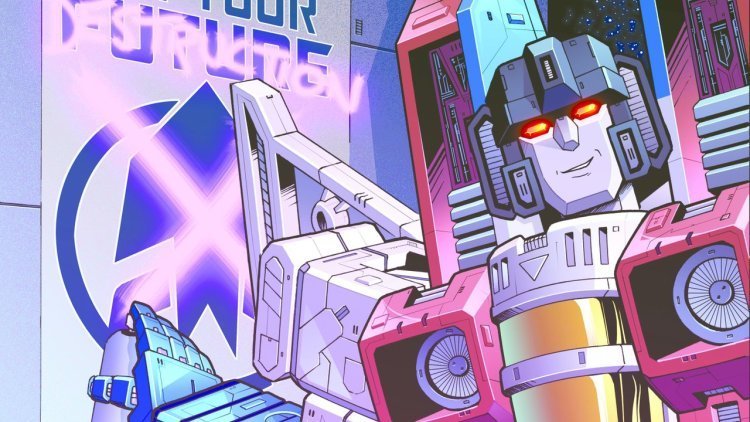 The Transformers comic book universe as you know it is gone. Last year’s Transformers: Unicron didn’t just bring an end to a 13-year saga of Transformers comics at IDW Publishing, it also marked the end of the entire Hasbro Comic Book Universe. But that doesn’t mean IDW is finished with this license.

Instead, the company is using 2019 to reboot Transformers and start fresh. Their newest series, simply titled Transformers, reboots continuity from square one and travels back all the way to the beginning of the rivalry between Optimus Prime and Megatron.

We had an opportunity to interview both IDW Editor-in-Chief John Barber and Hasbro’s VP of Global Publishing Michael Kelly to learn more about the new series and why starting from scratch was the right move for this long-running franchise. They also shed light on a brand new character that is a franchise-first and some unexpected ways in which the new series is exploring the humanity behind the Robots in Disguise.

Check out our exclusive preview of the new series and then read on to find out more.

Since first acquiring the rights to Transformers in 2005, IDW has basically been telling one massive story spread across a number of different titles. While relaunches and new titles were common, most of these books followed one consistent, unified continuity. The new series is unique in that it abandons those 13 years’ worth of established history and starts completely fresh.

As you’d expect, this is part of an attempt to broaden the appeal of the franchise and make the Transformers comics more accessible for new readers who might be intimidated by the sheer number of books available. Kelly told us, “When you are working with a continuity that spans 13 years, it can be pretty daunting to jump on board. The creative teams we’ve worked with in the former continuity excelled at appealing to new readers, and I think it is safe to say that over the past 5 years we’ve had the broadest and most diverse audience in the history of our Transformers comics program. But this new series provides an opportunity for new readers to join us who may have been on the sidelines wanting to get in but overwhelmed by the sheer volume of storytelling, while at the same time renewing our commitment to our long-time fans and giving them both a satisfying ending and an exciting new beginning.”

“We already had the best fans in the world, so we had that going for us.” said Barber. “That said—absolutely, we all want to reach out and introduce new readers to these characters and worlds and mythology. The previous Hasbro comics universe was one that meant a whole lot to me. I love that series and those versions of the characters. But we hit a really natural point to put a genuine, and I hope satisfying, ending on that story.

As for whether fans can expect the Hasbro Comic Book Universe continuity to continue in some form, it doesn’t sound likely. Barber said, “I really love that story and that universe. I still talk to everybody that worked on those comics. I love reading them, and we’ll continue to keep the comics in print and in our deluxe IDW Collection hardcovers. But there’s no plans for ever going back to that universe. Much as I love it, personally I feel like we told the story we set out to tell.”

We were curious what made these two the right candidates for the job, especially given that Ruckley comes from a fantasy novel background rather than being a traditional comic book writer. Both Barber and Kelly indicated it was Ruckley’s knack for finding the humanity behind these larger-than-life characters that made his pitch for the reboot stand out.

According to Barber, “Co-editor Tom Waltz had worked with Brian in the past, and had great things to say about him. I mean, I love his writing, too, of course. Tom really wanted Brian to pitch, and the stuff Brian came back with was really exciting. It had an amazing sense of scale. Physical scale, in terms of the idea of there being Transformers that are new, young, and (relatively) small coming into a world where there are giant, massive, ancient mechanical creatures. And emotional scale in the sense that this is an epic struggle for the heart and soul of the galaxy but we’re seeing it through the eyes of real (metal) people with real feelings.”

“It’s not always easy to write gigantic, mechanical, shape-shifting alien beings in a way that makes them relatable and sympathetic,” said Kelly. “But that’s what we need, because these characters have dreams, aspirations, and motivations that are not that dissimilar to ours. It was very clear in Brian’s pitch that he understood and embraced that challenge, and I was eager to see how his grand plan would play out. And as John says, his ability to show Cybertron through a lens of wonder and discovery is a unique take that I think will appeal to a very wide audience. We’ve really never before seen Cybertron in quite this light.”

As for Hernandez, Barber praised his take on the world and characters of Cybertron, saying, “The art of Angel Hernandez and Cachét Whitman has crafted a world full of wonder. That’s the thing to me—the sense that Cybertron is an amazing place, unlike anywhere else in the universe. That’s what makes the world special, and what makes its downfall so tragic.

The Golden Age of Cybertron

Perhaps the single biggest difference between IDW’s previous Transformers comics and the reboot is that the new series is firmly set in the past. Transformers won’t showcase Optimus Prime and the Autobots defending earth from Megatron and the Decepticons. Instead, it’s set during the golden age of Cybertronian civilization, before the planet was ravaged by civil war. In this era, Optimus Prime is still known by his original name, Orion Pax, and he and Megatron are still close friends and allies.

Barber teased that the series will showcase the growing friction that eventually leads to all-out war on Cybertron. “What I think is really cool about this—besides the characters and the mystery our heroes find themselves embroiled in as the series opens—is that we get to see all these changes happen in real time. We’ll be there with Orion Pax and Windblade and Soundwave as society starts to fall apart. This won’t be a flashback, or a history lesson—it’s all happening right in front of us.”

“The relationship between Orion Pax and Megatron is one of the great tragic set pieces in comics, and this telling will feel both archetypal and fresh, ” said Kelly. “Knowing they were once friends; knowing that in many ways their ideals are compatible, and yet knowing they are doomed to fall into devastating conflict provides never-ending drama, even if in the back of your mind you think you know how it’s going to end. I keep wishing we could go back to that moment and prevent the rift; just imagine what these two could have achieved working together.”

Finding the Humanity of the Transformers

While the growing rift between Orion Pax and Megatron will form the backbone of the series, Transformers will also showcase a number of other main characters. The goal is to provide a deeper glimpse of Cybertronian culture and, again, explore the human side of these larger-than-life characters.

“We’re delving into the weirdness and intricacies of a world on the precipice of change,” said Barber. “Cybertron in this story is part of an interstellar community; it’s a place with its own culture at a point where that culture is undergoing seismic changes. Being ground-level in this world gives us a perspective we’ve never had—we’re not entirely among the movers-and-shakers, we’re seeing what it’s like for normal citizens.”

Barber pointed to iconic heroes Bumblebee and Windblade as major focal points in the series. “As the series starts, Bumblebee is helping usher a new Cybertronian—I mean a just-come-to-life-in-the-story character—named Rubble. Bumblebee acts like a sort of tour guide as we see some of the sites on Cybertron, and Rubble starts to learn what being a Cybertronian means. Along the way they meet up with Windblade—and while that’s happening, there are larger events with Orion Pax and Megatron going on.”

We were also intrigued to learn about another new addition to the Transformers cast, Geomotus. Geomotus is a character who struggles with social interactions and could be said to fall on the autism spectrum.

Barber clarified, “Geomotus is one of the first openly neurodivergent Cybertronians. He struggles with unfamiliar social situations and doesn’t care much for more aggressive bots like Prowl. He can deal with the unfamiliar, however, as long has he has his “shapes”—essentially blocks that help him by giving him something comforting to focus on. And with his shapes in hand, he’ll end up on the crew investigating the murder mystery because he’s a master of geology and of finding patterns and small details in Cybertron’s very metal that others overlook.”

Barber also spoke about how a character like Geomotus fits into the overarching goals for the new series. “I think one of the things IDW can pride itself on over the course of our many Transformers series is emphasizing the humanity of Cybertronians—we’ve given them love and longing and loss and other L words. But, yeah, I think the goals of this series are very different. We’re trying to show the wonder of being alive on a planet like Cybertron and we’re trying to show even more diversity in its population. It’s really easy to make the Transformers alien and that can be fun, but it’s important to make them human, so to speak—because that’s how we relate to them.”

Transformers #1 will be released on March 13.

Takara Founder Passed Away At 94